Many years ago I started a 15cm by 15cm needlepoint ladybug for my sister who, at the time, had a bug themed room. I believe I started this project somewhere between 1996 and 1999. The ladybug portion was finished by my then 8-10 year old self, but the rest took a bit longer to finish. 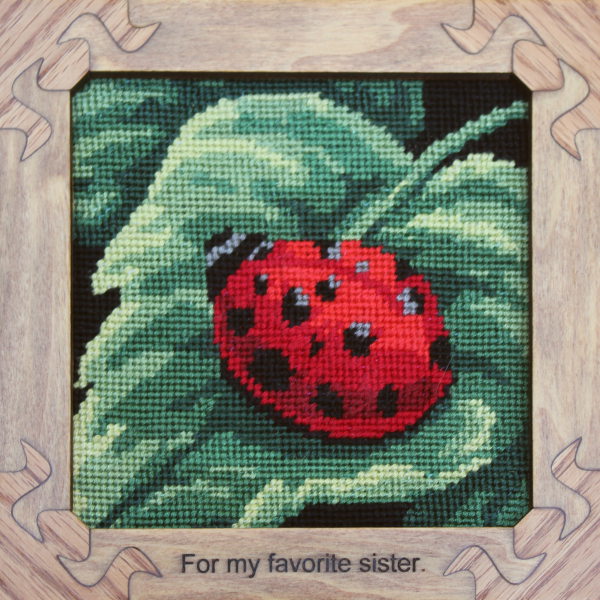 As seen assembled. After 15+ years, this is the longest project I have ever finished.

I don’t remember what occasion I was originally making it for, my guess would be Christmas because I think I bought it with my mom when she was buying a stocking to make. This may not be correct though, considering how long ago it was. I do know that the package had a (c) of 1996, so I am guessing it was around that time. I worked on it on and off for a number of different occasions, such as graduations (High school (I think,) College, Getting married, first house, and so on.

I have had, for some time, a like of frames. I wouldn’t call it an obsession, but I like how well they combine form an function in a way that soothes even the most OCD individual. (Unless it isn’t hung level.) I wanted to cheaply make my own frame on the laser cutter. The design goal was to make something that securely joined the corners while still looking nice. I had originally started thinking about dovetails, but realized that there was no way to do that without reducing the width of the wood to an unacceptably thin and weak cut. In the end, I ended up designing this joint which maintains a large part of the integrity of a solid piece. I made the frame in 2012 or 2013, and remembered I didn’t have a frame for my still unfinished needlepoint. I began to work on my needlepoint but stopped after just a short amount of work. 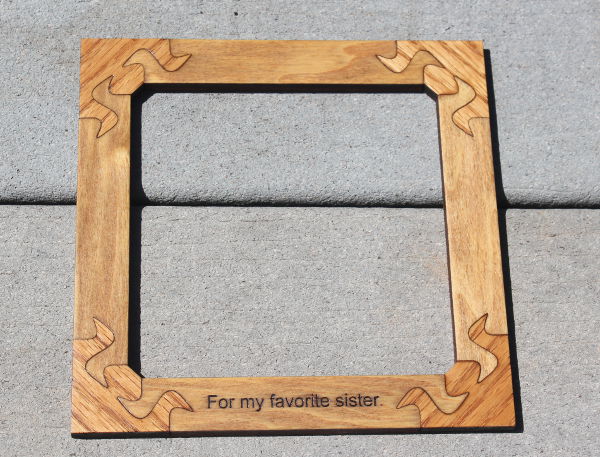 I call this one “my deck”, on deck canvas.

Finally, after my spine spontaneously imploded, I had the free time, and general lack of ability to do anything that allowed me to finish my needlepoint. In August of 2014, shortly before my sister had her (first) child, it was finished. 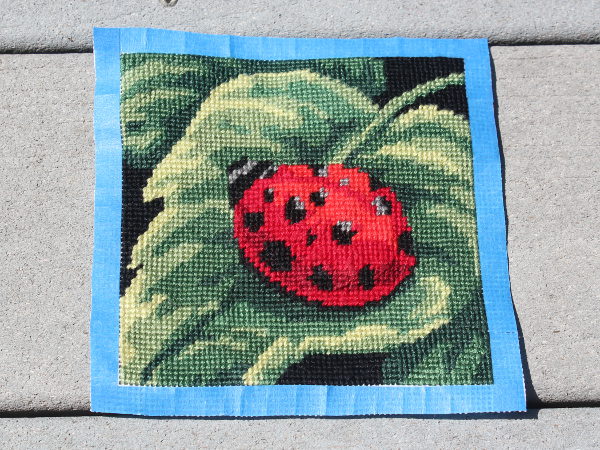 Not to bad all things considered. Just don’t look at the back.

I sent the frame and the wonderful work of art to my sister, and asked her to stretch it (I didn’t really know what I was doing when I started so it is a bit “warped”) and hang it on her wall.